Provides information on the major release changes and updates in Bunifu UI version 2.0.0 from previous releases.

Written by Wilfred
Updated over a week ago

In the past few months we've been hard at work on improving Bunifu Framework for its next big leap. Yes yes, we've been slow on updates of late, but it was all for a good reason - your productivity was and still is at the heart of our work...

One-click updates have been one of the most requested and craved-for features for all our existing users. We wanted an easy-to-use and existing model of updates management. And that is why as from version 2.0.0 of Bunifu UI and Bunifu Dataviz, we'll start rolling out our official updates via NuGet. 🤗

With NuGet, you'll now be receiving instant updates and upgrades for any new changes, bug-fixes and feature releases. Tracking updates won't be a hassle anymore and likewise will upgrading your projects.

Alot of concerns arose concerning our previous client licensing. Some users majorly had issues dealing with license activation. We definitely had to do something about it... That is why as from version 2.0.0, we'll be rolling out a new and better client licensing for all our new and existing users. We've managed to fix the License Activation popup everytime one opens an existing Bunifu UI project.

Here's a preview of the new License Activation dialog: 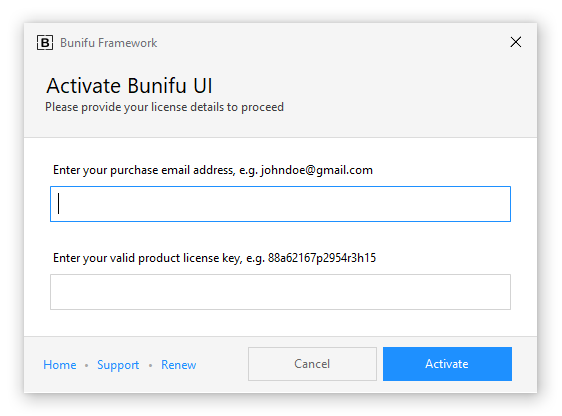 The License Activation dialog will popup once you drag-and-drop a control onto your Form or User Control just as it did before. The major difference this time round is that once your license has been successfully activated, you'll notice that the file licenses.licx has been added to your Project if you navigate to and collapse the Properties section in Solution Explorer.

Note: The licenses.licx file does not include the license string itself. It just contains information about the licensed components. In case of Bunifu TextBox control (Bunifu.UI.WinForms.BunifuTextBox), the following string is addded:

As you can see, it contains the namespace and control name, the assembly version, culture information and the unique public key token. Based on that information, the License Compiler (lc.exe) compiles the real license string that will be embedded into the executable assembly. The lc.exe is a small utility of the .NET Framework SDK which is used by Visual Studio during the build process.

If your license has expired:

One of the major concerns we've also heard over time was on the need for device removal when switching a license from one machine to another. A good example is when a user wants to switch from an old laptop to a new laptop and so needs to transfer their license to the new laptop. This wasn't possible before, but it is now.

With Bunifu Device Remover, you can easily delete your current device by running the utility (bdr.exe) either normally or via the command-line.

Here's a preview of the utility: 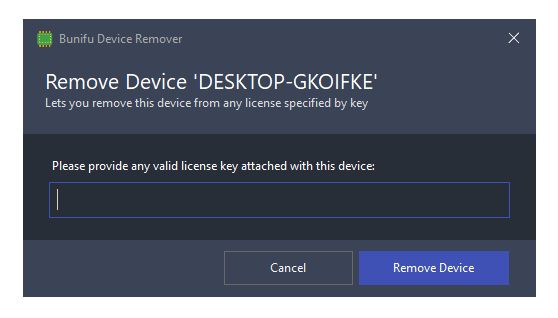 All you'll need to do is paste your license key in the input dialog and hit 'Enter' for the removal to be done. Please note that this can only remove the current device you're running the utility on and therefore does not allow you to remove other devices unless it's run from them too. Also note that the utility requires an Internet connection for device removal to occur.

We're still in the beta stages of refining our entire range of products and we'll be happy to hear from you concerning our progress so far and what you'd like to see in the upcoming releases of Bunifu Framework.

We do hope you'll love these additions and more as we endeavour to improve our offerings and your overall developer productivity.

Did this answer your question?